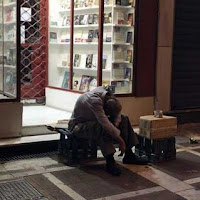 Δεν θα προλάβεις ούτε κιχ να βγάλεις...
Greeks Plan Legal Action Over Property Tax
Crisis-weary Greeks are striking back at added austerity, vowing to mount class action
suits in defiance of a new property tax.Student protesters march in front of the Greek parliament earlier in the week. The tax is being introduced by the government to meet deficit reduction targets as nervous creditors consider the future disbursement of multi-billion loan funds to Athens. The Athens Bar Association says it is preparing to launch class action suits against the state, arguing that
the government's move to charge the new tariff through homeowners' electricity bills is unconstitutional.
"The public power corporation - DEH - is a public utilities company," said lawyer Dimitris Varvaresos.
"It's not the state tax-collecting authority."
Streams of social networking sites and blogs have sprung up since the property tax was announced over the weekend, marking a humiliating climb-down for the socialist government and its pledge to protect the households from further austerity measures.
The government hopes to collect more than 2bn euro (£1.74bn) from the new property tax - the fourth to hit Greek homeowners in under two years.
It has also warned it will switch off the lights of landowners who dodge payment of the new tax.
Seven in 10 Greeks already face difficulty paying a rash of austerity-imposed taxes, according to a recent opinion poll.
The public power corporation, DEH says it, too, is having financial problems, with 909,000 accounts in arrears.
In announcing the new property tax, finance minister Evangelos Venizelos said homeowners would be charged a certain rate per square metre between 50 cents and 10 euros (43p and £8.72p).
Four days later, when full details of the Bill - due to be tabled in parliament next week - were disclosed, homeowners were slapped with surcharges of up to 16 euros (£13.95p) per square metre, stoking public anger even further.
While the measure aims to target high earners, the finance ministry has moved to exempt hotels, factories, monasteries and places of worship owned by the wealthy Greek Church, leaving struggling social groups - including unemployed and handicapped Greeks - to foot the bill.
"This is war for us," said Nikos Fotopoulos, the union leader of DEH.
"We stand by the working class. We will block any attempt to have this charge printed on our bills and to keep struggling Greeks in the dark."
Failure to collect the targeted income could imperil Greece's chance of getting further loans from its European peers and the International Monetary Fund.
filotimia
Αναρτήθηκε από Gr_One στις 18.9.11